The following includes highlights, pivotal life moments, and milestones that came out in the conversations. One post in the series will be published here at the TeachOnline website each week for the next eight weeks.

I was born and raised in Nicosia, Cyprus, which is in the Eastern Mediterranean Sea. Nicosia is in the middle of the island, about a 30-minute drive from the beach. I was born in 1978, so I was raised in the ‘80s and ‘90s, which is probably like the ‘50s and ‘60s in the United States. 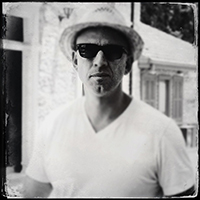 School felt like it came out of the Soviet era. There were 30 kids in one classroom with one teacher and no heating. For example, up to the sixth grade, the class had one teacher who taught all the subjects. Then we spent six years in high school, beginning in seventh grade. The first three years were general courses such as English, history, social studies, religious studies, and math. Then the last three years we picked what we wanted to concentrate on based on what we wanted to do after high school.

I worked every summer since I was 14 or 15. For three years I did construction, and I remember when I bought my first Sound Blaster as a kid. I built my first computer using that money with help from my parents — it was a 486 SX, 170-megabyte hard drive with no audio. Once I saved enough money, my next big purchase was the audio card and speakers.

When I was younger, people often came to me for help with computers, and I would show them. I remember when one of my aunts was writing her dissertation. She didn’t know how to use a printer or Word Perfect at the time, so I helped her type up the whole thing.

At school, we didn’t get a computer class until I was in ninth grade. I remember learning to code in MS-DOS, and I was one of the better students in the class. The teachers kept telling my parents, “This guy really likes computers. He needs to go down this road.” My parents didn’t know, but they respected the teachers’ opinions because I was good at that.

In the morning, we would go to school, and then in the evening, we would prepare to take entry exams for universities. We went to these tutoring centers for math, accounting, and computer science. For math tutoring, I worked with a guy who had studied in the United States. This was not like a formal tutoring center — I went to the instructor’s house. He lived upstairs, and he had his tutoring center downstairs. He was by himself, and he taught three hours a night, ten kids in his class.

Right after high school, I went into the military for compulsory service. I was a machine gunner, and the first base I was in was on what we call the Green Line. It was a little outpost in the middle of nowhere. Seven of us lived there, and I actually requested to go there right after basic training. I was there for a year, and it was a lot like camping for a year. I learned people skills — hanging out with seven people with guns in the middle of nowhere for a long time is interesting. People get bored, and I had to quickly learn how to handle their various tempers.

I have a cousin, who is nine years older than I am. He came to the U.S. to study when I was still in school. My dad had two sisters, and both of them ended up in Tennessee because the husband of one was from there. Those were my connections to the United States, but I was the first of my immediate family to go to the United States. I didn’t want to go to Greece for college, where the higher education system is generally a mess unless you become a doctor. I wanted something different. The whole point of going to college is to be exposed to new ideas.

Both the University of Toledo in Ohio and ASU accepted me, so we had a decision to make. We had no idea about Ohio, no idea about Arizona. One of my mom’s cousins showed up one day and she saw the documents, the papers, and she said, “My son goes to ASU.” We asked, “Okay, is it good?” She said, “Yes it’s good. It’s nice. It’s fine. You should go there. My son will help.” And that’s how I came to ASU.

I remember I had four classes: computer science, calculus, geography, and English. I had two As and two Es. My As were in English and geography and my Es were in Calculus and Computer Science. I remember getting a letter from the registrar’s office that I was placed on probation because my GPA was, I think, under 2.0 or something like that. I thought, “What does that mean?” Well, what it means is that I was on the verge of getting kicked out. “No, I can’t get kicked out. That’s impossible.” I decided at the time that computer science wasn’t for me. It was a horrible experience from those two classes, but I still wanted to do something with computers. Once again, I found myself having to make a decision. That’s how I began studying psychology, but I kept the computer stuff. I used to fix computers for my friends from Cyprus, helping them build computers and they would pay me on the side. When I first came here there were 60 to 80 people from Cyprus studying here.

The plan was to get a master’s degree. My mom said, “You have to get a master’s degree before you come back.” She wanted me to be prepared for the competition. In Cyprus, a majority of high school students go to college or a trade school, some kind of higher education. PhDs are very common, actually more common there than in the U.S.

I thought, “Okay, the safest thing I can do in Cyprus is getting a job at a school as a teacher or counselor.” At the time, one of our relatives was a principal at the school for the deaf. He was involved in special education initiatives, and they were trying to formalize special education services for students. They didn’t have any services before; it was just everybody in the same class. That’s why he said, “Maybe you should look into it and see if you can get a special education background.”

I looked up specific programs here — special education, emotional disorders, behavioral disorders. I figured I’d run my computer thing on the side, and if special education didn’t work out, I’d still have computers. I was putting my eggs in two baskets, and my plan was to go back to Cyprus. Then again, I thought, “No, I can’t go back because with the money I’ll make in Cyprus I’ll never be able to live on my own, start a family. I’ll be paying off loans for a lifetime.”

I continued with my studies and finished the degree. I completed six months of student teaching and six months of a research project at a juvenile correction facility. Some of those experiences really made me appreciate how lucky I was to have a good home life. The stories ranged from sexual abuse all the way to murder, and they were in there for life.

After this I taught for a year in a public school, eighth-grade students with emotional, behavioral disorders. I was working as a teacher with a master’s degree making $34,000 a year, and I said to myself, “No, I’ve got to figure this out. I’ve got to do something else.”

The teachers we had were a very good team, and I’m still close with some them even though it was ten years ago. Everybody was on the same page. It was challenging, but it was fun to work with the kids. I was on my feet all day long. It was not boring. My desk job was the side business, the web development work.

I passed my comprehensive exam for the doctorate. I had been using a lot of technology when I was teaching, and instructional design interested me. I remember I saw the posting for the instructional designer position here at EdPlus on a Sunday night, and I applied the same night. That was it.

Don’t take out loans. Every time I pay my loan I think, “I wish I hadn’t taken this loan.” Then the next question that comes up is, what would you have then? I don’t know. I have no idea.
Additional editing: Debra Sims

In this video (6:46) learn strategies and processes for creating video lectures.